Why Don’t School Buses Have Seat Belts? Everything You Need to Know

Did you know that more than half of the nation’s almost 50 million K-12 students use a school bus to get to and from school each day? This greatly contrasts the pattern a few decades ago when active commuting was the norm.

According to the National Center for Safe Routes to School, in 1969, 48% of students between five and 14 years old walked or rode their bicycles to school. By 2009, that number was down to 13%. And as of 2016, 10% or fewer students walked or cycled to school on average.

With such a significant number of children depending on school buses back and forth to school safely, many people wonder why there are no seat belts on any school bus. Without seat belts, are children safer or in more danger?

In this article, we will look at some facts and statistics to answer the question, “why are there no seat belts on school buses?”

School buses are considered to be the safest form of ground transportation. In fact, between 2007 to 2016, there were 320,874 fatal motor vehicle traffic crashes, and only 1,147(0.4%) of those crashes were classified as school-transportation-related.

Because they carry young children who require more safety measures and stability, school buses are the most regulated vehicles on the road. These regulations make students about 70 times more likely to get to school safely when taking a bus instead of traveling by car.

So why aren’t there seatbelts on buses if they’re highly regulated?

Apart from the seat belt issue, school buses have other features that make them relatively safer:

In the past few years, many states have been improving school bus safety by doing two main things: Enabling districts to use stop-arm cameras to catch vehicles illegally passing a stopped school bus and requiring seat belts on school buses.

The stop-arm cameras are increasingly being adopted as a way to bring to book rogue motorists who violate the stop arm laws. In 2019, around 17 million drivers illegally passed school buses while their stop arms were deployed. Stop-arm cameras help reduce incidences of this dangerous act. In fact, 99% of drivers who received and paid a ticket for illegally passing a school bus did not receive a second one.

The images captured by the stop arm cameras are reviewed to get the plate number of the offender which is then forwarded to the police. As of 2021, at least 24 states have passed school bus stop-arm camera laws, Delaware and Michigan being the latest.

When it comes to seat belts, most states don’t mandate their installation on school buses. As of 2022, only eight states have made it mandatory.

Do school buses have seatbelts?

Some school buses have no seat belts, some have lap belts, and a few have the 3-point shoulder belts the National Transportation Safety Board (NTSB) recommends. Even when the bus has belts, the children aren’t required to wear them. In tests run by the National Highway Traffic Safety Administration (NHTSA), there has been evidence that lap belts and three-point belts, when misused, can cause severe abdominal or neck injuries. Additionally, some kids focus more on fun than proper seat belt etiquette, making this an essential point of consideration. However, in the same study mentioned above, they also said any increased risk associated with using lap belts in smaller school buses is more than made up for by their ability to prevent ejections.

So we’ve established that school buses are generally safe. Still, the question remains: Why don’t buses have seat belts? Here are some reasons.

One factor contributing to school buses’ overall safety is that the drivers are rigorously trained in current laws, regulations, and behind-the-wheel training as mandated by Federal and State regulations. In many states, they are required to receive more training than any other driver. Requirements vary by state, but some of the training and assessment school bus drivers undergo includes:

In addition to the initial rigorous training, school bus drivers are required to take 10 hours of renewal instruction every 12 months of their certificate validity. The Department of Motor Vehicles may cancel the school bus certificate if drivers fail to do this.

Size and weight matter in accidents because they play a part in a vehicle’s stopping force and how that crash force affects the passengers. When a car encounters an object, its lesser weight means it will stop rather quickly, projecting the passengers forward and ejecting them from their seats. But for a bus, it would take a significantly longer time to slow down, meaning the passengers experience less crash force than in a car.

For this reason, seat belts are more critical in passenger cars than in large school buses.

So, why do school buses have seat belts in smaller vehicles but not in larger ones?

School buses under 10,000 pounds are closer in weight to passenger cars and are therefore required to have seat belts.

The use of compartmentalization as a substitute for seat belts in large school buses is primarily helpful for crashes where the bus impacts an object from the front. However for side-impact crashes, seat belts offer significantly greater protection than compartmentalized seats.

This was demonstrated after two 2012 fatal school bus accidents in Chesterfield, New Jersey, and Port St. Lucie, Florida. The NTSB found that properly worn lap-shoulder belts provided the most significant protection during severe side impact crashes and rollovers. During these accidents, those who were not properly restrained were more severely injured.

School buses, since they are transporting children, have state regulations that restrict their speed, often under the speed limit. This allows school buses to drive at relatively lower speeds than non-school buses, contributing to fewer accidents and lower crash severity. Additionally, the speed limit makes school buses less likely to speed and be involved in single-vehicle run-off-road crashes.

Still, depending on the city, this speed limit can be up to 65 mph on the highway. An accident at such speeds can still be devastating. The larger school buses usually don’t have seat belts, but the inside of the bus is designed differently to make up for it, which we’ll explore below.

In 1977, the Federal Motor Vehicle Safety Standard (FMVSS) 222 was passed into law, establishing regulations for school bus passenger seating and crash protection. From this standard, the NHTSA decided that the best way to provide crash protection to children in school buses was by designing the seats according to a restraint system known as compartmentalization. This system involves installing tall, strong, closely spaced seats whose backs are padded with impact-absorbing material. The idea is that these compartmentalized energy-absorbing seats restrain kids from being ejected, keeping them contained in the event of a collision. So actually, these compartmentalized seats are essentially acting as a larger version of seat belts.

However, auto collisions are not the only type of accident. Buses have rolled over, for instance. None of the preventive measures mentioned so far can save a child in that scenario other than a seat belt.

So the answer to “why don’t school buses have seat belts?” is that compartmentalization has long been considered an adequate safety measure. However, new evidence shows that it is insufficient for all school bus accidents. So how feasible is it to put seatbelts on every bus?

In the summer of 2018, NTSB came out with a new position. All new buses should have 3-point seat belts. These are the buses with a shoulder and a lap strap.

Even the NHTSA, while maintaining that compartmentalization provides good protection, concedes that real-world data show lap belts can have a positive effect in rollover and side crashes with no evidence of increased safety risk. So if seat belts are proven to help collisions, why don’t school buses have seat belts?

The issue is that NTSB and NHTSA only provide recommendations. The decision to install seat belts on large school buses is left to states and local jurisdictions because they are best positioned to weigh the pros and cons of seat belts in their school transportation programs.

Some groups are rallying to pass specific seat belt laws for larger school buses in certain cities. However, with school buses already being the safest form of ground transportation, getting people on board for the higher cost can be tricky.

Give New Life to Your Lifesaver

While stakeholders continue to debate whether there should be seat belts on buses, one thing is for sure, seat belts save lives. However, once used in an accident, the seat belt might need to be given new life.

That’s where Safety Restore comes in. We perform seat belt repair and webbing replacement for all vehicles, including school buses. We also make custom-colored seat belts which can be exciting for children in all vehicles.

What is the Seat Belt Law in Tennessee 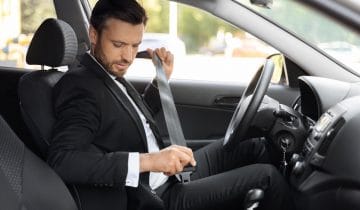 Common Seat Belt Issues: Why You Should Get Them Checked