There is a common misconception amongst people that airbags are enough reason not to wear a seat belt. Following that logic, sometimes seat belt repairs are delayed by some vehicle owners since they have airbags anyway. While an airbag is definitely necessary and can make a huge difference when accidents occur, it’s not meant to stand alone. If anything, there’s a team dynamic at play: airbags and seat belts are meant to complement each other. It’s such a great pairing that when US vehicles are sold, it’s a requirement for them to have dual front airbags.

Whenever automobile safety is brought up, there is a scientific approach taken by engineers. When it comes to safety, their design model takes physics into account, primarily what occurs when your body’s in a crash. The first law of Newton comes to mind: when an object is moving, it will keep going at the speed it’s on towards the same way it’s headed up until an external force intervenes. Basically, your velocity—direction and speed combined—will only change when interrupted by something else.

Needless to say, a car’s velocity is essentially that of your body when you’re in it as it’s running. In a car that’s going at 50 mph, or maybe even driving it? Your body is pretty much going at 50 mph too. During a crash, the car will stop because of the external force from whatever it crashes onto, but your body won’t. Hence crash impact devices, which essentially have an external force, stop your body during the crash in a safe manner.

Your body’s initial protection from harm when an accident occurs is the combination of airbags and seat belts. The seat belt acts as a restraint, which lets you stay in the car and avoid hitting the dashboard head-on. Even if you’ve been in a minor accident, like a collision at a rather low speed, you probably felt your head move upon impact despite your body being stable. That’s all thanks to the seat belt.

When a more intense crash occurs, your chest, head, and neck will all get cushioned through your airbag. This is why you should get your car checked when your airbag light turns on. It’s important that your airbag is ready at all times.

It’s the perfect combination: your seat belt will keep you in the best place for your airbag to cushion you properly. Contrary to popular belief, front airbags aren’t the only type of airbags out there. There are also curtain airbags, side airbags, and even torso airbags. However, even with all of that, they work best with each other.

Seat belts and airbags are meant to work together, and it’s crucial for any vehicle to have both. The former keeps your body in place during a crash while the latter acts as a cushion. No matter what type of airbags your car has, you must wear your seat belt every time you’re in a moving vehicle for ultimate safety.

Do you need an airbag module reset or similar services? Reach out to Safety Restore today! We are the world’s leader in post-accident restorations specializing in seat belt repairs and airbag modules. 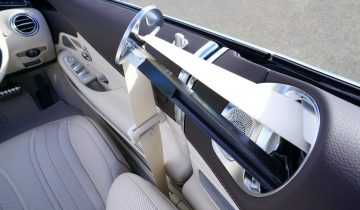 What are seat belt extenders ?