People overlook the safety features of their cars, so they suffer injuries during a crash due to their recklessness. One of the car’s primary safety features is an airbag, but more than one type. If you are curious to know more, read on.

Frontal airbags are located in the center of the steering wheel. Some cars come with side airbags attached to the seat. When the car gets in contact with another vehicle, the airbags deploy and cover the car’s parts where occupants sit. The bag takes time to deploy, so make sure that you are wearing your seatbelt at all times. If you’re not, you can get injured due to the airbags not having enough time to inflate and protect you.

Lateral airbags are located on the sides of the car’s compartment and are deployed after the frontal airbags give way to the crash’s impact. They protect the occupants on the car’s sides, from the front seats to the back seats. These bags are activated based on the airbag sensor system. If the airbag does not deploy, it is most likely due to a car malfunction.

Supplemental airbags are airbags installed on the front ceiling of some cars. When the sensors detect a crash, they are deployed to protect the occupants from injuries caused by flipping over the vehicle. They are not essential for the car to be considered safe to drive, but they provide more protection for the passengers.

Just like the name suggests, these airbags are located on the front and are designed to protect the knees of the drivers. They deploy after the airbags for the head and chest have given way to the impact caused by a crash. They also protect the steering wheel and adjust to the size of the thighs of the driver. If you are tall, you are most likely to use this airbag more than others.

These airbags are installed to line the side of the car. They are activated by the airbag sensor system and deploy after the front airbags have given way to the crash’s impact. Some vehicles have this airbag in the doors and the sun visor.

Side curtain airbags are a necessity in cars made after 2011. The airbags are connected to the sensor system, and they are triggered when the sensor detects a crash, and they protect the head, torso, and legs of the driver and the front-seat passenger. These airbags are installed on the doors and the roof of the car.

These airbags are located on the headliner of the car’s windows. They are designed to protect the head and shoulders of the passenger sitting in the backseat. They are activated when the sensor detects a crash. They deploy after the frontal and side airbags have given way to the crash’s impact.

These airbags are located under the pedals on the passenger’s side of the car. They are designed to protect the feet of the driver and the passengers in the backseat. When the sensor system detects a crash, they deploy against the vehicle’s door.

The airbag system is not a replacement for the seat belt. Instead, it is a system for protecting occupants in the car during a crash. The different airbags are intended to provide complete protection to all the car’s occupants. Before you get a new car, make sure to ask the dealer about the airbag system installed in the vehicle.

Safety Restore is the world’s leader in post-accident restorations specializing in seat belt repairs and airbag modules. We also provide webbing replacements and instrument cluster repairs. If you want to have your car’s airbag reset in Westfield, MA, we’ve got you covered! Call us at (855) 552-7233 for immediate assistance!

What does the Airbag Module do?

Seat Belt is Stuck in the Buckle ? 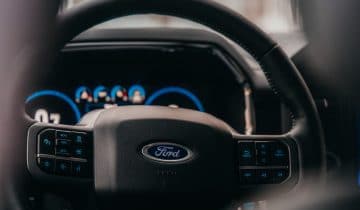 A Guide to Collapsible Steering Columns and Experiencing Impact