Newton’s first law of motion, also called the law of inertia, suggests that if a body is at rest or moving at a constant speed in a straight line, it will remain at rest or keep moving on the same line at constant velocity unless acted upon by force. In a vehicular accident, inertia is why some drivers survive a crash with a bit of help from seat belts. But how does the first law of motion protect people from death during a collision?

Inertia acts as a stopgap during a collision, and once the vehicle stops, it’s the occupants’ bodies that provide the final substitute. If you are in a car moving at high speed and an accident occurs, the inertia causes the vehicle to slow down and eventually stop. During the collision, the occupants’ bodies continue to move simultaneously until their seat belts control them.

2. Limit the Velocity of the Occupants

3. Provide a Buffer Against the Breaks

The body’s inertia keeps the vehicle’s occupants in place and away from the break-in case of a sudden stopSupposeIf the car cuts into the occupant’s body with considerable force. In that case, the inertia will help the occupant and the vehicle’s inertia and not be thrown forward. As a result, the precaution could save the occupant’s life and reduce injuries.

5. As a Preventative for Death

Seat belts don’t just keep you in place; they also can save your life. In a collision, the body is thrown forward by inertia. In a way, it is the reason why seat belts are designed to stop your body from moving forward, thus preventing torso and neck injuries. If you are not wearing a seat belt, you can be thrown into your car’s windshield or the dashboard, causing fatal injuries.

In 2017, the rate for seat belt use went up to 89.6 percent from the 2014 rate of 78 percent. With the safety straps saving almost 15,000 people in the US, it has become more of a standard for people to follow orders when wearing seat belts while driving on the road. Seat belts save lives, but you can never rely on a seat belt to keep yours. If you want to come out of a collision alive, wear a seat belt and avoid driving under the influence.

If you are in a car accident, use a seat belt to stay in place, take the right kind of impact and save your life. If you have been injured due to a collision, it is a good idea to contact a personal injury lawyer to help you receive appropriate compensation.

Safety Restore aims to keep drivers and passengers safe while on the road. We help cultivate a driving culture that practices safety among everyone on the road by providing seat belt repair and airbag module reset services. If you’re looking for seat belt repair services near you, contact us today and book an appointment. 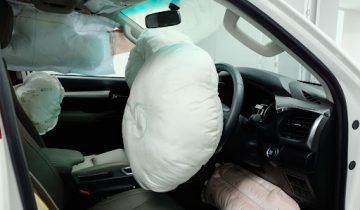 When Do Airbags Deploy – The Ultimate Airbags Guide

What is the Seat Belt Law in Georgia