From 1975 to 2017, there have been 374,196 lives saved by the seat belt. Although its invention goes back to the 1800s, Nils Bohlin made the most significant change to the safety device that people still use today.

The Swedish engineer changed the seatbelt, producing the three-point seatbelt we know today. But aside from the innovation, people know nothing more about the inventor who continues to save lives on the road.

Nils Bohlin was born in 1922, in the village of Liden, in the southwestern part of Sweden. The little town was only a stopover for the child since his family moved to Borlange, a larger village in Dalarna, a couple of years later. Bohlin went to elementary school and middle school there, followed by a high school in Falun. He worked as a design engineer at Volvo from 1949 to 1965 on various projects, including a hovercraft vehicle. But it was not until 1964 that he began work on the seatbelt.

2. Volvo Gets the Credit

3. Not the First Seatbelt

Although Bohlin is known for the three-point seatbelt, the Swedish engineer is not the only one who invented a seatbelt. A British aviation pioneer, George Cayley, created the first seatbelt in the 1800s, but cards didn’t come along for another 80 years.

To create the seatbelt, Bohlin extensively studied the effects of a crash on the human body. He discovered that the head and chest were the most critical body parts protected in a collision. He created the three-point seatbelt with two straps that circle the waist—the third straps hook between the other two, over the shoulder, and across the chest.

A seatbelt is essential for every person in the car, so most governments make it mandatory for all passengers to wear one. That’s why the United States enacted a federal seat belt law in 1984. Although the law is controversial to some, it has led to a decrease in traffic fatalities, especially among the young.

Bohlin’s invention remains relevant in driving today because it continues to save lives. But even with the seatbelt rates among drivers and passengers, another area that needs improvement is child safety seats. Unsecured children are prevalent in motor vehicles, which increases the risk of severe injuries during an accident.

5. The Most Important Invention in History

In his lifetime, Bohlin never made much money off of his invention. But many people still regard him as the most important invention in history. The Swedish engineer’s contribution to the world is just as significant as other, more well-known names in history.

While Nils Bohlin may not be as famous as other inventors, his impact on modern civilization is just as significant. If not for Nils Bohlin and his invention of the seatbelt, driving would be a lot more dangerous than it is today.

Safety Restore is a post-accident restoration company handling seat belt replacement services. Our goal is to keep every driver and passenger safe while on the road by providing high-quality and efficient maintenance services. If you’re looking for seat belt repair services near you, book an appointment through our website today.

The Need for Airbag Maintenance & Replacement—What to Do 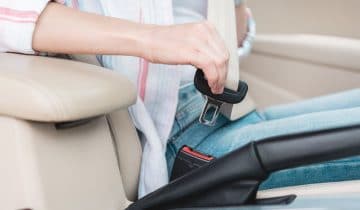