If anything can get into your nerves when trying to drive your car, it is trying to deal with a locked seat belt retractor or a jammed seat belt pretensioner. Unfortunately, this is a common problem for many drivers, and many are at a loss at what to do to try and fix a seat belt that somehow jams every time. That being said, there are many causes to this issue. For some, it could simply be how the seat belt was designed. For others, it could have been an accident that has damaged their seat belts.

Today, we want to talk about the common causes of locked or stuck seat belts to help you understand why your seat belt isn’t playing nice:

The simple act of driving down a hill can cause your seatbelt to be “stuck.” This is because many modern seatbelts have sensors that will detect your car’s inclination. If it detects that you are going downhill, it will auto-lock as a safety measure in case something goes terribly wrong.

Sometimes, when you lean forward, the seat belt might suddenly get stuck or jam up. This is because many seat belts are built to stop you from moving forward too fast, which is usually the case in high-speed car crashes. However, there are some cases that the seatbelts are too sensitive, and you may need to have the seatbelts inspected and even replaced.

Sometimes, the retractor themselves may have deteriorated or have been damaged somehow. In this case, you have three options to try and fix the problem. You can either recondition the seat belt, replace it with a used seat belt, or buy a brand-new seatbelt.

Sudden deceleration, whether by a car accident or sudden braking, will cause the seat belt to lock up to protect you from unnecessary impacts. As such, whenever you decelerate quickly, expect the seatbelts to lock. Now, if they don’t lock, there’s something wrong with your seat belts. In this case, you may need mechanics to come and check the seat belts for you.

6. Debris in the Mechanism

This isn’t common in front-side passenger seats. Instead, it is an issue that the rear passengers typically face because of where the mechanisms are located. Debris can sometimes find its way into the retractor’s internal mechanisms, which can cause the mechanism to get stuck and jam up. If this happens, you will need to take out the retractors to have them cleaned.

While some causes to a stuck seat belt may be its safety mechanisms kicking in, it can also be caused by other legitimate issues. Regardless, if you believe that your seatbelts are jamming up for the wrong reasons, send it in for a fix. Mechanics will do their best to identify any possible issues that your seat belts are experiencing, ensuring that when the seat belts need to work, they’ll work flawlessly while still keeping you free from any unnecessary headaches caused by stuck or jammed seat belts.

Safety Restore is the world’s leader in post-accident restorations specializing in airbag modules and seat belt repairs. If you are looking for a seat belt replacement to fix your jammed or stuck seat belt, check out what we have to offer. 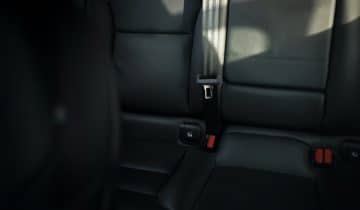 The Significance of Wearing a Seat Belt While Traveling